Using the power of mapping to support South Sudan

The Google Map Maker team, along with the World Bank and UNITAR/UNOSAT, held a unique event at the World Bank Headquarters in Washington, D.C., and a satellite event in Nairobi at the same time. More than 70 members of the Sudanese diaspora, along with regional experts from the World Bank, Sudan Institute, Voices for Sudan, The Enough Project and other organizations gathered together to map what is expected to become the world’s newest country later this year: the Republic of South Sudan. UN Secretary-General Ban Ki-moon has asked the international community “to assist all Sudanese towards greater stability and development” during and beyond this period of transition.

South Sudan is a large but under-mapped region, and there are very few high-quality maps that display essential features like roads, hospitals and schools. Up-to-date maps are particularly important to humanitarian aid groups, as they help responders target their efforts and mobilize their resources of equipment, personnel and supplies. More generally, maps are an important foundation for the development of the infrastructure and economy of the country and region.

The Map Maker community—a wide-ranging group of volunteers that help build more comprehensive maps of the world using our online mapping tool, Google Map Maker—has been contributing to the mapping effort for Sudan since the referendum on January 9. To aid their work, we’ve published updated satellite imagery of the region, covering 125,000 square kilometers and 40 percent of the U.N.’s priority areas, to Google Earth and Maps.
The goal of last week’s event was to engage and train members of the Sudanese diaspora in the United States, and others who have lived and worked in the region, to use Google Map Maker so they could contribute their local knowledge of the region to the ongoing mapping effort, particularly in the area of social infrastructure. Our hope is that this event and others like it will help build a self-sufficient mapping community that will contribute their local expertise and remain engaged in Sudan over time.

We were inspired by the group’s enthusiasm. One attendee told us: “I used to live in this small village that before today did not exist on any maps that I know of...a place unknown to the world. Now I can show to my kids, my friends, my community, where I used to live and better tell the story of my people.” 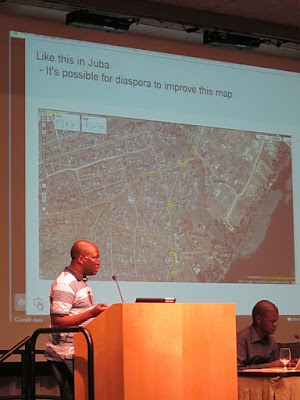 The group worked together to make several hundred edits to the map of Sudan in four hours. As those edits are approved, they’ll appear live in Google Maps, available for all the world to see. But this wasn’t just a one-day undertaking—attendees will now return to their home communities armed with new tools and ready to teach their friends and family how to join the effort. We look forward to seeing the Southern Sudanese mapping community grow and flourish.
Posted by Ivan Tasev at 23:05