Melange, our management tool for the Google Summer of Code and Google Code-in programs, is an open source project many of whose developers are former Google Summer of Code students.
Melange developers gather from around the world four times a year to spend a week working full time on Melange. In May 2011, we held our Melange All-hands (as in All hands on deck) at the Google Office in San Francisco, CA.
We launched the new UI for Melange in late March as part of the release of Melange v2 with a new architecture which is way faster than the previous version. There was a fair amount of positive feedback from our users, the Google Summer of Code community, along with many feature requests. As such, our goal for this All-hands was to implement as many of the high priority requests as possible. For example, we implemented batch mentor invites and made legacy data accessible. In addition, one of our developers worked on the Statistics module which provides various types of statistics of students and mentors participating in the Google Summer of Code program.
The new version of Melange also had one major component missing: a way to create and administer midterm and final evaluations for both mentors and students. This was a vital piece of missing functionality, so we spent a considerable amount of time designing and implementing the pages necessary to create, edit and administer these important evaluations. 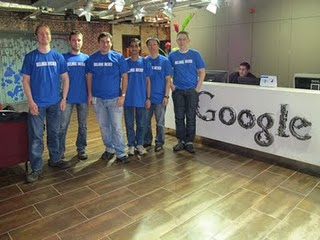 We had a dedicated brainstorming session to discuss various design issues and the changes that we wanted to implement. We also decided to switch our datastore to High Replication Datastore on Google App Engine and worked with the Google App Engine team to help us set it up.
Our Javascript guru worked on refactoring a few portions of the Javascript code such as the lists display and the templates which are internally used in Melange to write Javascript modules among other things.
We also fixed a bunch of issues during this All-hands. Some of the issues we fixed are:
With so much work done in a single week, we feel we had quite a productive week! If you are reading this and would like to contribute to Melange, please clone our repository and start contributing. We have t-shirts waiting for you!