Seeing as I’ve already made comparisons in some of my own recent blog posts concerning the accuracy and completeness of various online mapping providers, the content in Glenn’s article gave me an idea for another comparison…

So, I set off to find some errors:


Google Maps Error – “Abberbury Avenue” in the Heart of Oxford

I was born and brought up in Oxford, England. When I returned there recently, I was surprised when driving down Longwall Street in the city centre that my (Google Android-based) car navigation told me to “turn left onto Abberbury Avenue”. In 18 years, I had never heard of Abberbury Avenue, and was certain that the road in front of me was the High Street.

On returning home, I checked on the main Google Maps website. Here’s a screenshot of the offending road in question, right next to Magdalen College in the heart of the city: And here’s how that same section appears correctly in OSM – it’s definitely the High Street (also notice, once again, at the awesome level of detail in the OSM map – the college quads being individually and correctly labelled etc.): There is an Abberbury Avenue in Oxford, incidentally, but it is found several miles away, near Rose Hill. The journey from Google’s “Abberbury Avenue” to the true location is shown as follows: 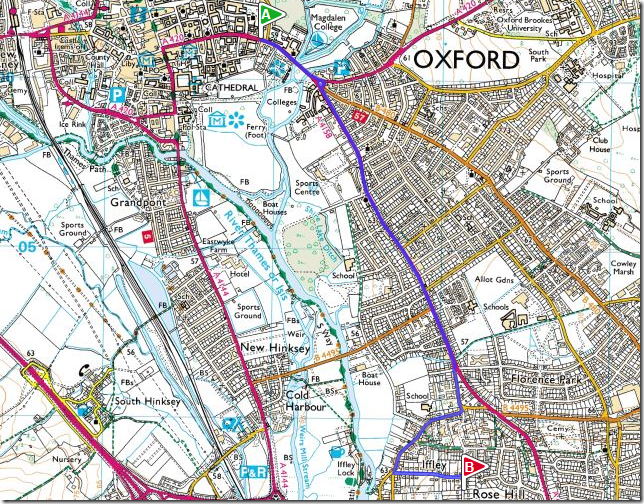 So, I set about following Glenn’s instructions to report the error. And then I stumbled across my second problem. The steps described to report a problem in Google Maps, which are also stated by Google on their own help pages here , say:

You can access Report a Problem in a couple of places:
Look closely at the following screenshot of what I see when I right click on “Adderbury Avenue” on the Google Maps website, and see if you can spot the problem: That’s right – Right-clicking on the map does not give an option for “Report a Problem”, and neither is there a “Report a Problem” link at the bottom right of the map. From a quick search of the internet, it seems that the ability to report errors on Google Maps is limited to users in the USA, so that’s points lost immediately for Google…

So how exactly am I meant to report this problem? Fortunately, there is a copyright notice at the bottom of the map crediting Tele Atlas as the source for Google’s map data, and Glenn’s article also gives instructions on how to feedback directly to them. Fortunately, this is a very user-friendly step-by-step process, and I completed the details of the error  and submitted it as shown below: I was given a tracking reference number and a link to track the progress of the error online. In theory, if the error is corrected in Tele Atlas’ own dataset will eventually feed back into Google Maps…. let’s see if it does.

The nature of the error I found in the Bing Maps website was slightly different. I couldn’t find any labelling errors on the map, but when trying to use the directions feature to plot adriving route between Norvic Drive and Peckover Road in Norwich, I noticed an interesting instruction: This immediately alerted my attention – pretty much any road named Chalfont Walk is, well, designed for walking, not for driving. Sure enough, as shown in Open Street Maps, it’s pedestrian access only: Fortunately, the Bing Maps website does have a feedback link at the bottom right corner,  with different options to report problems with e.g. imagery, points of interest on the map, directions, etc. I filled in the feedback form with details of the error as follows: I was given a “Thank you for taking the time to tell us about your experience” message, but no tracking reference and I didn’t have the opportunity to provide an email address, so Bing Maps also loses points here. I guess I’ll just have to keep checking back to see when (if) the problem is solved….

As noted in a previous post of mine, OSM has incredibly high quality data – higher, I believe, than that of the Ordnance Survey. Finding an error on the OSM map was therefore going to prove tricky. In fact, the only “error” I could find was not really an error – more an omission (and a pretty minor one at that). Jubilee Park, a park near my house in Norwich, wasn’t shown on the map: So, you know what? I just logged into http://osm.org and, using the online map editor, added the missing feature. 5 minutes later, and here’s the correct OSM map: So, that’s full marks for OSM. But who will come in second place out of Bing and Google? I’ll let you know as soon as I hear anything from either of them.
Posted by Ivan Tasev at 15:33