Long-Term Radiation Exposure at Fukushima on the map 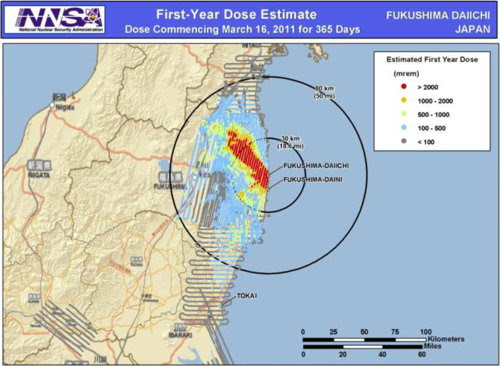 The U.S. National Nuclear Safety Administration has produced a map (as part of a presentation) showing the estimated first-year, long-term radiation dose in and around the Fukushima nuclear plant. “In the red swath of land northwest of the plant where weather deposited a lot of fallout, potential exposures exceed 2000 millirems/year. That is the level at which the U.S. Department of Homeland Security would consider relocating the public,” says ScienceInsider. “Although 2000 millirems over 1 year isn’t an immediate health threat, it’s enough to cause roughly one extra cancer case in 500 young adults and one case in 100 1-year-olds.”
Posted by Ivan Tasev at 10:52